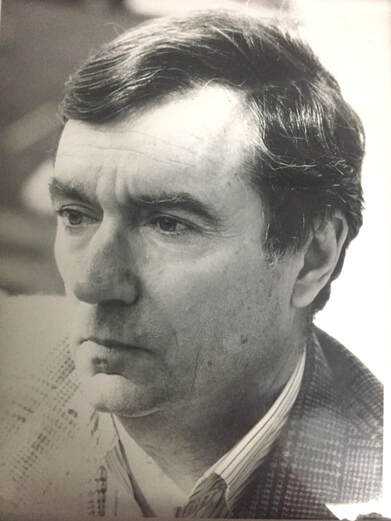 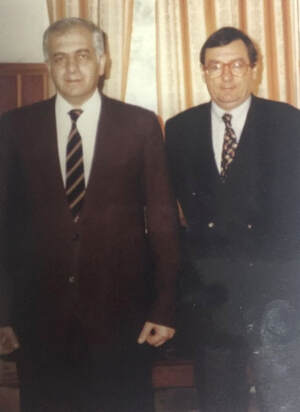 Charles with Georgian President, Zviad Gamsakhurdia
Charles was born on the 30th of August 1939 in Montecito, Santa Barbara, California, the fourth child of Prince Nicolas Tchkotoua and Carol Marmon. He died at home in Marbella, Spain on 11th September 2022.

Charles lived in California and then in Switzerland where his parents moved to when he was 15 years old.  He attended Wentworth Military Academy Junior College in Lexington, Missouri followed by George Washington University and finally Geneva University where he read Political Science.

He had a passion for classical guitar which he took up in his teens when he moved to Switzerland.  He studied music both in Lausanne and Geneva and achieved conservatoire level.  He attended many guitar seminars in both South of France and Spain where he had the opportunity to be taught by some prestigious guitar masters. He had a collection of important guitars and lutes that he collected during the 1960s, including a fine 1969 José Ramírez 1a  guitar.

He started his early working life based in Switzerland with a financial company called Bache & Co – at the time it was the second largest retail brokerage company in the world. After a short spell the opportunity arose to become more involved in his own personal investments, sometimes in partnership with his elder brother, Zou.

Charles married in 1967 at the age 28 - Helena Flores Sabino (daughter of the first Venezuelan Ambassador in the whole of the Middle East, as His Excellency Bernardo Flores Planas). He and Helena had two children, a daughter Cristina born in 1968 and a son Chalva in 1970.

His great interest for antiques led him to invest in a furniture factory in Madeira, an island that he loved and where with his family he stayed for long periods at a time.

An opportunity to develop some houses in Ibiza led him and family to settle in Palma, on the neighbouring and at the time more established island of Mallorca. Amongst many other projects, Charles invested and constructed a charming complex around an old farm called C’an Mariano Mayans close to the beautiful beaches of Las Salinas.

He also built a little village called La Parata in the mountains in the South of Spain near the coast of Mojacar. The village, in the province of Almeria, has its own little square, “Plaza del Principe”, named after him.

One of Charles’ life-long ambitions – his dream, really - was to return to his ancestral home country of Georgia. Though born and educated abroad, like his father Nicolas, Georgia was never far from his thoughts and his heart.

The opportunity arose after the Soviet Perestroika in the early 1990’s when President Zviad Gamsakhurdia was democratically elected and the possibility of getting involved in the country presented itself. An early meeting with the new president during Charles' first visit to Georgia resulted in him being appointed as his Plenipotentiary Respresentative in the United Kingdom. This provided new contacts and allowed Charles to use his international network to seek further support for the country (at this point and always in a stricly non-political capacity).

Charles dedicated much of the 1990s in particular towards projects to support inward investment, enhancing democracy and making international connections for the benefit of Georgia - and to bring not only Georgia but the whole of the Caucasus region to greater recognition and understanding in the West. He wrote a paper, “The Past explains the Present” for the book Contrasts and solutions in the Caucasus (Aarhus University Press, 1998) and also spoke on many news channels to promote the region. He was a guest on the BBC news and was interviewed by Jeremy Paxman, CNN news, by Simon Sebag Montifiore in the Spectator, the EEC in Brussels, Radio London, Spain & France and spoke to Otto von Hapsburg at the Parliament of Strasbourg. He was also invited to present to students at an Oxford Union debate. President Mikheil Saakashvili presented Charles with a Georgian passport in 2005 in recognition for all of his work and dedication abroad.

Charles was also very pleased to play a part in the release of a new edition of his father’s book, Timeless. The book, originally published in 1949, was re-discovered by the author and Georgian enthusiast, Peter Nasmyth in a second-hand bookshop in London. Using his extensive contacts, he traced Charles who was able to assist him with some aspects of Peter’s foreword to the new edition as well as taking part in its promotion at The British Georgian Society in London.

​Charles last visited Georgia in 2012 as part of a cultural delegation from Marbella. He is succeeded by his wife Helena who lives in Las Lomas del Marbella Club, Spain and his two children, Cristina and Chalva.